Hailey had Lasik too! 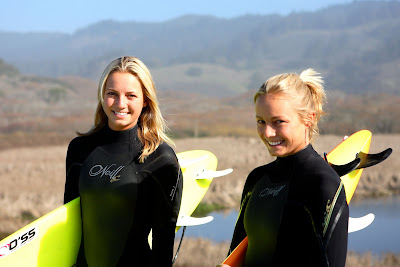 Photo by Rob Born
Like my identical twin sister, Sierra, I have been wearing contacts and glasses for over 10 years now. My sister and I surf and often have to be in and out of the ocean for long periods of time when we're doing photo shoots. It became a hassle to carry extra lenses with me in case one fell out. After long days at the beach my contacts would feel glued to my eyes. My contacts also became a hassle when I needed to stay up late or wake up early to study for finals or to finish essays. After the Spring quarter of my junior year at UCSB, I had had enough. When I came home for the summer to Santa Cruz, I scheduled an appointment with Dr. Bailey at the Plager Vision and Optometric Center.

I have had a few previous Optometrists and not one had suggested Lasik to me until I saw Dr. Bailey. I was born with congenital cataracts and had undergone lens replacement surgery when I was twelve. I had no idea that I was even a candidate for Lasik surgery until I talked it over with Dr. Bailey. Sierra had undergone the surgery about a month earlier and was ecstatic with the results. That day I scheduled my appointment to have Lasik surgery with Dr. Furlong of Furlong Vision Correction.

Today, my vision is perfect at 20/20 and I couldn't be happier. I can't believe I didn't do this sooner! I no longer have to deal with the hassle of contacts or glasses. My eyes feel great because they are no longer irritated from constant contact wear. Dr. Furlong and his staff couldn't be nicer or more comforting. I was a little nervous before the procedure but it was over so quickly and Dr. Furlong's reassurance kept me calm the whole time. I would definitely recommend choosing Dr. Furlong to anyone who is considering Lasik surgery.

Posted by Partridge Twins at 3:45 PM

Partridge Twins
Santa Cruz, California, United States
We were born and raised in Santa Cruz, California where we currently reside. We get to travel and model for some of my surfing sponsors including O'neill Clothing, Ocean Minded Footwear, Hobie Surfboards and Betty Belts Jewelry. We attend UC Santa Barbara and are both Communication majors. We hope you all enjoy our blog!